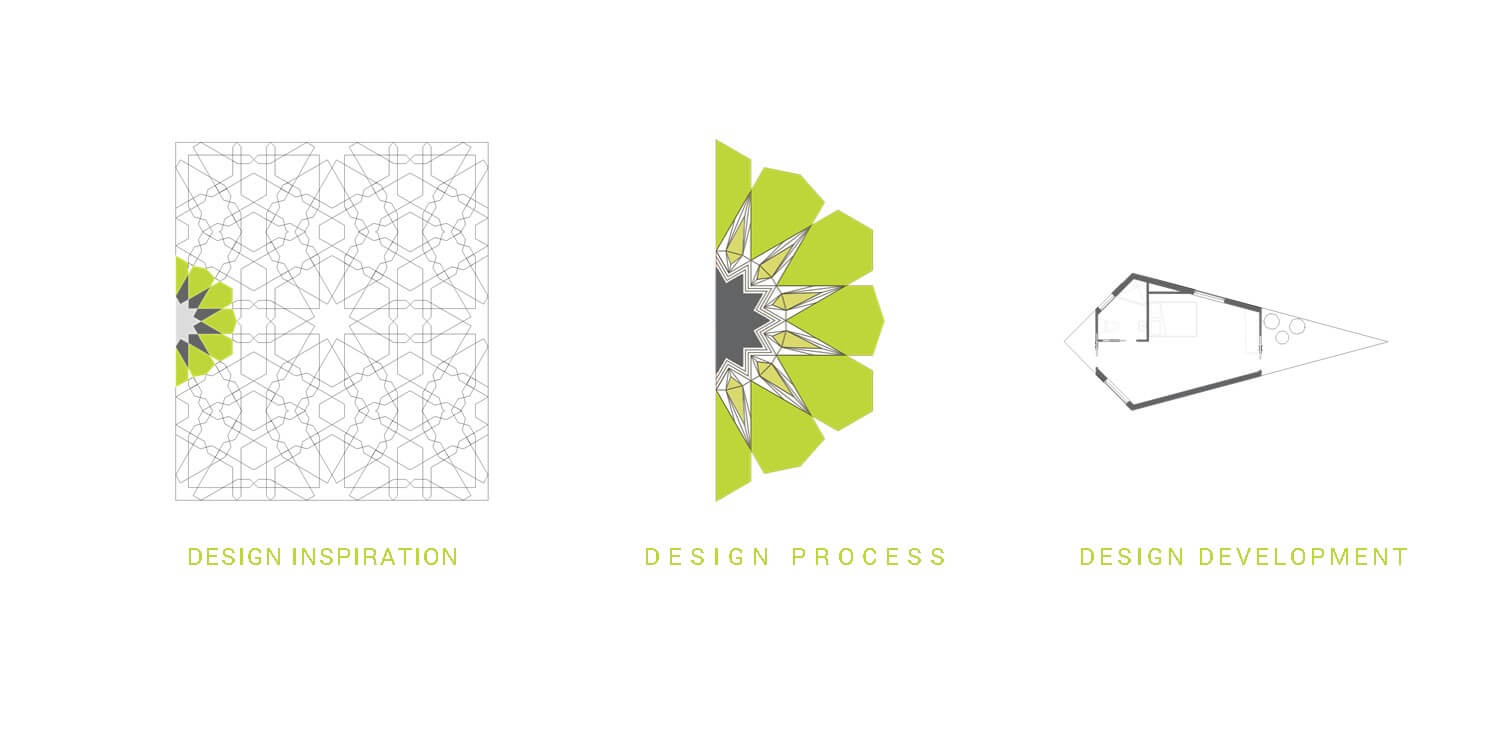 To create a ‘Centre for Islamic Art’ with 2 broad objectives:

1. To educate visitors about the history and tradition of Indo-Islamic art & crafts. Art includes architecture, the arts within books – miniature painting and calligraphy. Crafts include ceramics, glassware, metal ware and weaving.

2. To promote contemporary Islamic art, architecture, literature and performing arts. Some may be calligraphy and others miniature paintings. Many present-day artists paint in the miniature style.

The centre will invite artists and craftsmen, training people in arts and crafts through contemporary expressions via the studio and workshop areas. It will also function as an art gallery for artists to display their works and have exhibitions. To promote and raise awareness of the history of Indo-Islamic art, a provision for a small permanent exhibition area that displays various mediums that narrate, emphasise and preserve this dying art, which holds a significant place in the realm of Arts and Literature of a magnificent era.

Consideration was given to facilitate lectures and seminars by scholars from a multitude of disciplines including literary activities like poetry recitals, teaching Urdu and translation workshops from Urdu literature to Hindi, Marathi and English. There was also a requirement for housing for artists, faculty, and guest speakers. Finally, an area was required for screening documentary films and a small library.

All in all, a centre for history enthusiasts, art lovers, artists and scholars. A place which is open for all who are curious about Islamic art in India or want to learn and practice art as contemporary expression.

Islamic Geometry – Almost all geometric compositions are set within a rectangle. A perfect composition is made when there are quarter star patterns on the corner and half stars on the border (See Image below). 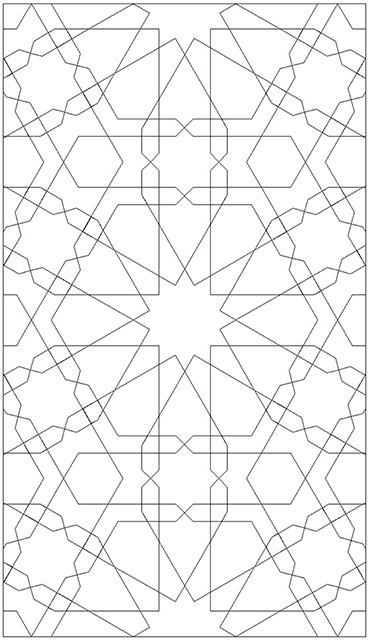 This star pattern is known as the √5 rectangle. It is a tenfold star pattern. It is based on a circle divided into 5 (or 10) equal sections, and thus, the proportion of the is √5 rectangle.

THE CONCEPTUAL ELEMENT chosen for this project was the different geometric solids formed on the basis of an Islamic pattern.

THE VISUAL ELEMENT chosen for this project was an Islamic Pattern. 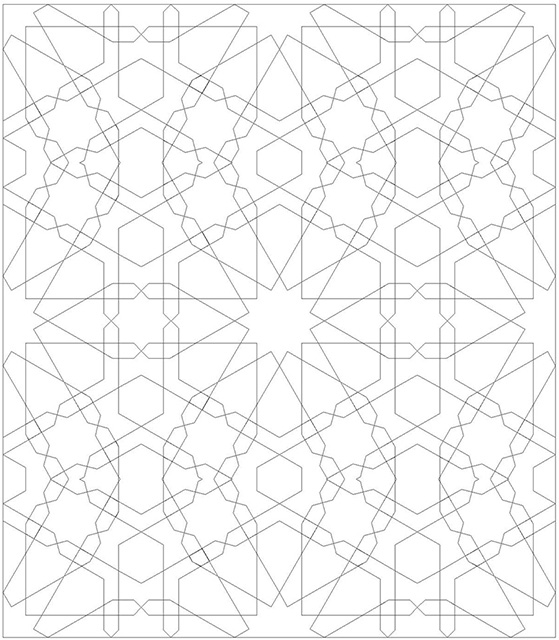 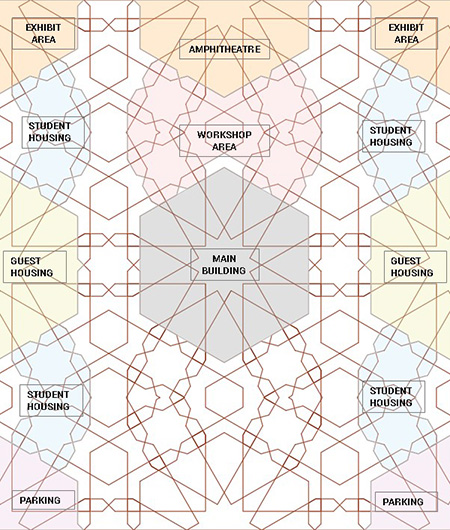 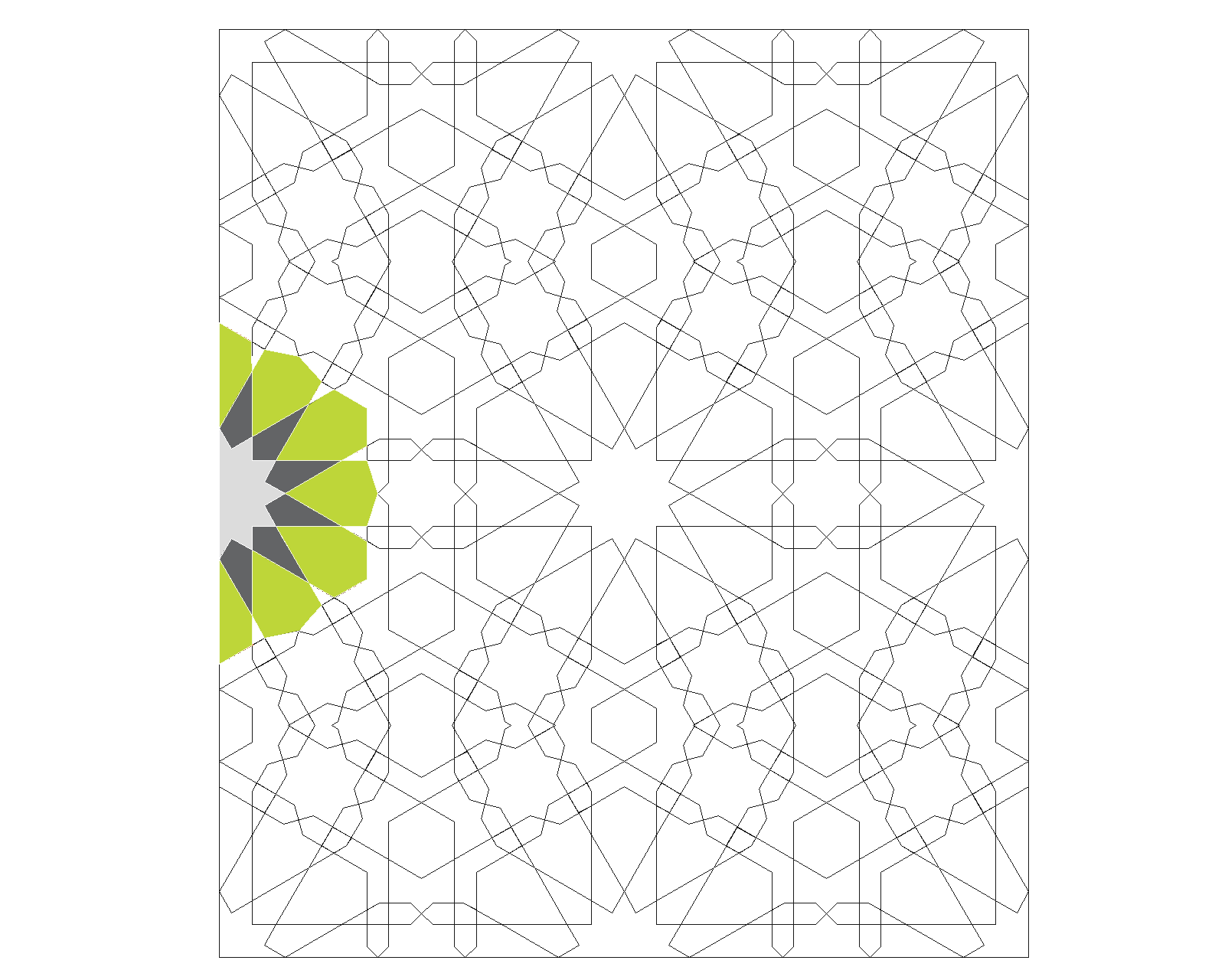 For this article, we have focused on the design of the guest housing block within the Centre for Islamic Arts. As indicated in the diagram above, this area is half of the 12-pointed star pattern. The first objective was to zone it and create a program for the area. Here, the outer circle was defined as the green space, which then leads into the private spaces (indicated in dark grey in the image above). 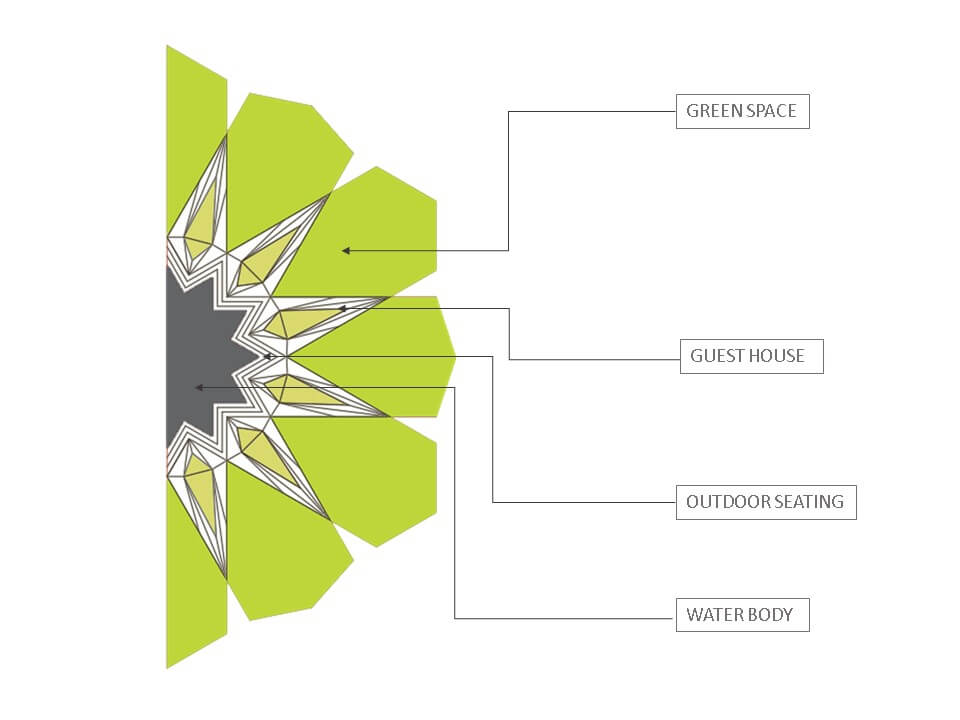 Within the interior of the private space (the area indicated in light grey), there is an additional outdoor area with seating that faces a waterbody which forms the central core of the space. Hence, achieving a public space, private space & semi-public space. The image below illustrates the program in further detail. 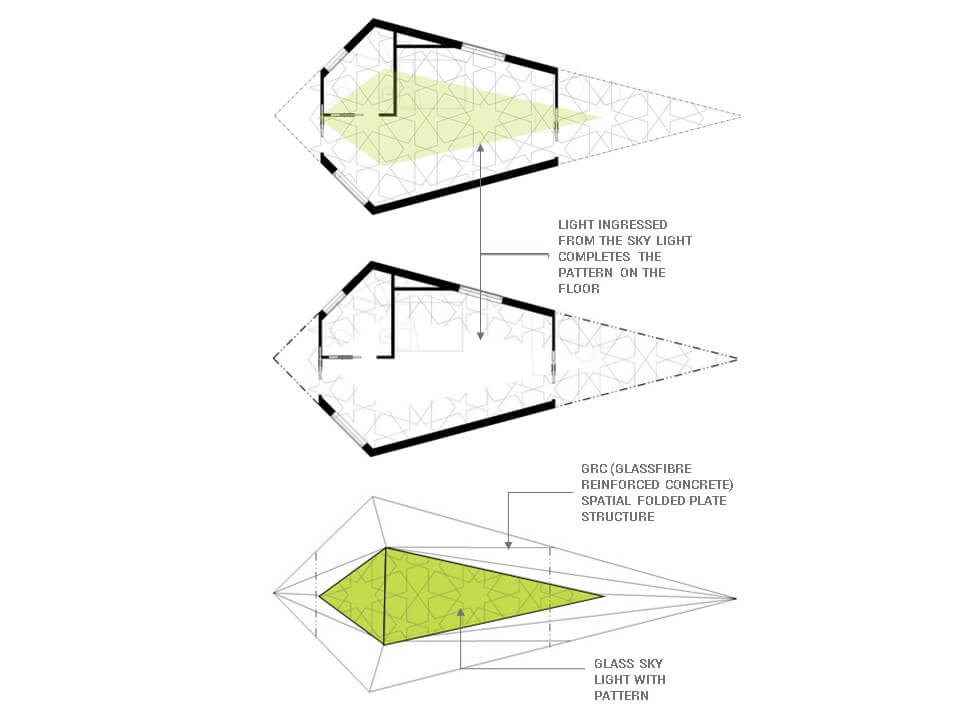 The spatial folded plate structure is made of glass-fibre reinforced concrete (GRC) with a metal framed Islamic pattern forming the glass skylight. The tile pattern on the floor is intentionally left incomplete at the central portion and that missing pattern is reflected on the sky light. At a specific time of the day, the sunlight completes the entire pattern on the floor – a beautiful way to integrate nature with art. 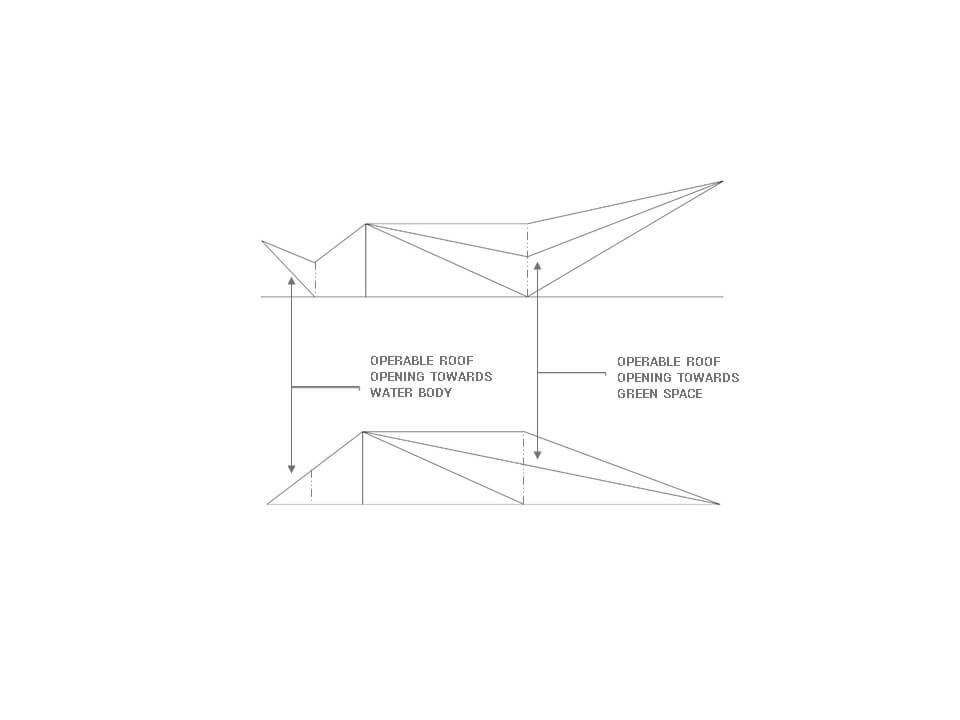 The roof of the guest house has a lever system allowing a portion of it to be raised or dropped from the front and back, allowing one to optimise the view facing the waterbody or the garden space along the periphery.

Using the principles of Islamic Patterns, which are interlaced and repetitive, we created a strong connect when it came to the planning of the guest house in context to its surrounding spaces. In this example, the interpretation of Islamic geometry through architectural design provokes the senses, heightens the experiences, and strengthens connections between various spaces and also within such surface modulated structures. 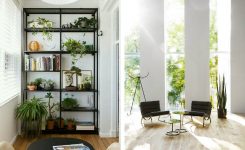 How To Manifest Peace: In and Around You 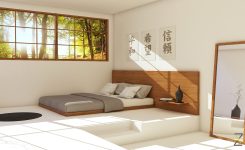 Decor Lessons From The Land of the Rising Sun 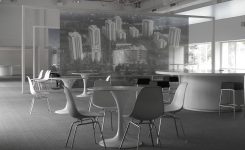 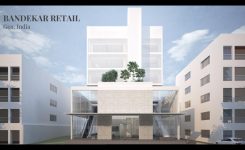 Art Beyond The Skill by Dominic Dubé 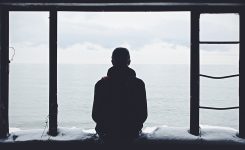 Designing For The Future – What Does It Mean?... 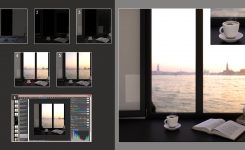 10 Tips For a Photorealistic Render